I picked this up end of last season for a song, as the previous (and original) owner was over riding it and didn't want to deal with the fact that it was running poorly/maintenance was due and the clock was ticking on the season, so it wasn't exactly prime time to sell a sled.

After chatting with the guy a bit, I felt pretty confident that his Push turbo system had a boost leak but he was so eager to sell it before the season ended that he was willing to let it go for $1000 US. He had already done a Cat 162 skid with a 2.5" Camoplast extreme track when he did the Push turbo setup 2 seasons prior and had only ridden about 500 miles since. Score.

Needless to say, I hopped in the car and made the 3 hour drive to get it the next day. The boost line had completely fallen off and the computer was not reading any boost pressure, so it was falling on its face as soon as the turbo spooled. 10 min fix with some new lines and she rips.

However, pretty quickly after I stopped laughing like a maniac every time I mashed the throttle (all previous riding has been on late 90s/early 2000 era 2 stroke trail sleds, so this was a MASSIVE power difference), I realized the steering was absolutely terrible. Several inches of movement of the handle bars with zero movement on the skis. Season was over anyway, so it went in to the garage.

Fast forward to end of summer 2021 and I started to tear in to it and landed on this forum while searching for answers/mods to get it ready for this season.

I have replaced most of the steering components (few more on the way), which has addressed the slop.

But since I got it so cheap, the natural next step is to throw a bunch of mods on it, right?

Current plan is:
Mountain Tech A-Arm kit - Debating between the 38" and the 34", leaning towards 34" since I live/ride mountains here in Southern Colorado. There's a ton of trails to ride, but only a few are groomed. Does it still count as trail riding if it's ungroomed 3+ feet deep powder its just happens to be covering a trail?
Mountain Tech Boards (as if you weren't already punished when you get stuck, these stock ones do not shed snow at all!)
Mountain Tech full belly skid
Oilite Bushings
Schmidt Bro's stage 2 clutch
Steering relocation (not sure what kit since OFT isn't around)
Skinz front bumper
Do something about the crappy boost gauge mount


I also want to remove the stock tail light and use a smaller one so I can use the tunnel area for a bag. These things need more storage, besides my back! 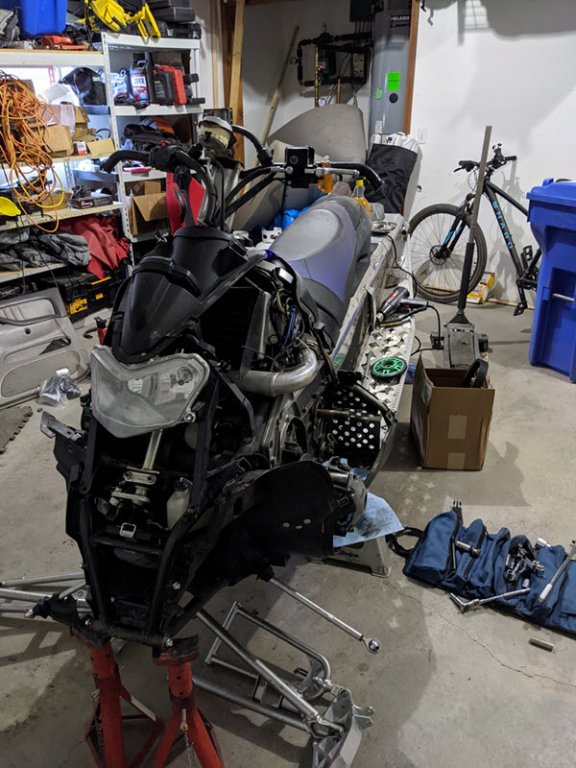 Looks like the PO "deferred" maintenance on the ball joints a bit too long.. lol

New steering knuckles on the way and Mountain Tech kit sorts this short coming (The other side looks OK, but i'm replacing both sides just to be safe). If you guys have any suggestions for other items to check/service/replace or additional mods - let me know!

Can't wait to get out and ride. If anyone is in the Southern Colorado area, let me know!

looking like you have it under control maintenece wise. only thing i would add to your list is to check the speedo bearing at the end of the drive axle under the secondary clutch unless you know the po did it when he did the suspension conversion. the one behind the secondary should be checked as well but not as much of an issue as the speedo bearing.

In a different post, Allen (@Srxspec ) of Ulmer Racing mentions this about those steering blocks that OFT used to make


Srxspec said:
@yam429I'm working on those billet steering blocks from a new supplier. I should have information soon.
Click to expand...

looking like you have it under control maintenece wise. only thing i would add to your list is to check the speedo bearing at the end of the drive axle under the secondary clutch unless you know the po did it when he did the suspension conversion. the one behind the secondary should be checked as well but not as much of an issue as the speedo bearing.
Click to expand...

Will do, thanks for the tip!


RobX-1 said:
In a different post, Allen (@Srxspec ) of Ulmer Racing mentions this about those steering blocks that OFT used to make
Click to expand...

Awesome, hopefully he'll chime in here as I would definitely like to get a set. Just ordered my Oilite bushings from Ulmer, too.
B

Local ski resort opened (no snow machines, just a good storm) which got me motivated to knock some stuff out. Riding conditions are still pretty lame but good snow is right around the corner for us here in Southern CO.

Brake pads were a tad worn (not sure why it wore so unevenly though, going to bleed the system to ensure there isn't air on one side of the caliper.) Went ahead and replaced the rotor too. It was scored pretty bad form the pad that had worn to nothing.

This might be the most beautiful brake rotor I've ever seen! 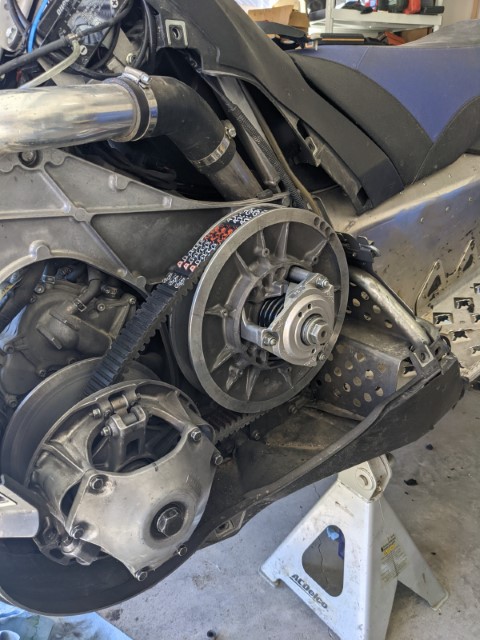 BOP Steering Relocate and sorted out a less 100% less tetanusy boost gauge mount. Here's what the PO had: I hated having a gauge that displays vacuum but never actually shows it since the source before the throttle plates, also wanted a lower pressure gauge so that it showed more movement for the ~7psi i'm running. I procured an Autometer boost only gauge and moved the location. I also didn't like it near the handle, obstructing my ability to grab it quickly (I don't think I need to address the quality of this mount.. lol). 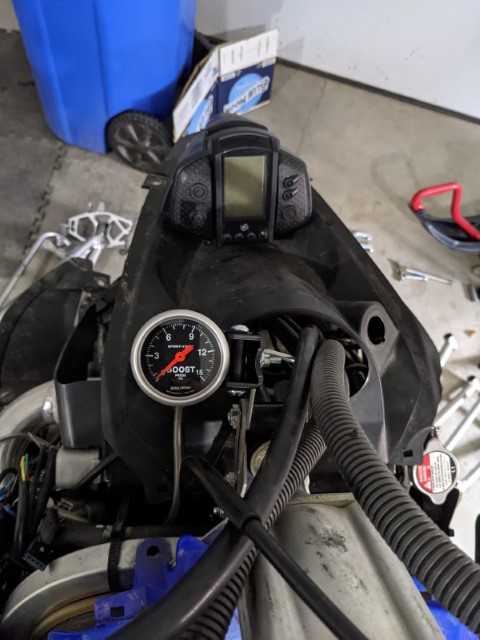 Replaced one of the washers in the BOP steering relocate with a bracket I whipped up and used the original cable loop to brace it. Pretty happy with how it turned out. It's visible but out of the way.

I can already tell I'm going to like the steering relocate. Position is much better. Although I might want to have a little taller handle bar riser (i'm 6'4"), I'll have to see how it feels actually riding but my arms are pretty straight when I'm standing, so it feels like it could be another inch or two higher for me.


Important performance modifications. I have since zip tied the cables away form the hardware so it doesn't rub through the loom. Sticker positioned to boost moral of the poor SOB that is giving me a ski pull... Still some life left, right?
(I have Oilite bushings from Ulmer to replace them all) Replaced the rear idler wheels with some Yamaha blue ones. Bearings on one of the two old idler wheels were really bad. It wouldn't free spin much more than a one complete rotation with the highly scientific "spin it on your finger" test. I figure with them being blue and actually rotating with minimal resistance it should add a good 20+ Yamaponies.. 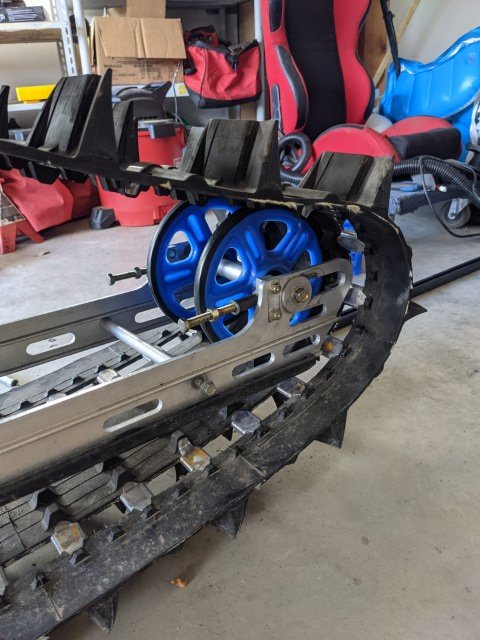 Finished the oil change (and discovered the PO installed an aftermarket skid plate, bonus!) and got about half way through hyfax before I had to stop for the weekend.

Getting pretty close to ready to ride! A-Arms and boards remaining.
Last edited: Oct 25, 2021
B

Finished it up! Had some supply chain and "I am stupid" related delays but I got it back together and wouldn't you know it, it's been dumping snow since Christmas eve. Merry Christmas indeed.

The Mountaintech Board install is a little hairy with all the cutting, but the instructions were super clear making it easy. The setup is awesome and I know it'll be a huge improvement over the terrible stock diamond setup. 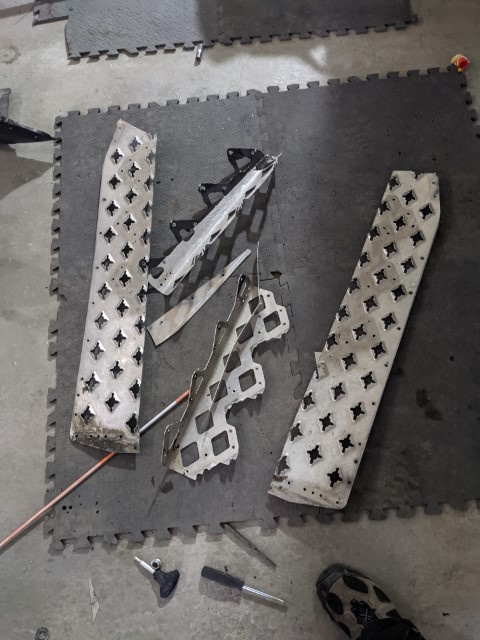 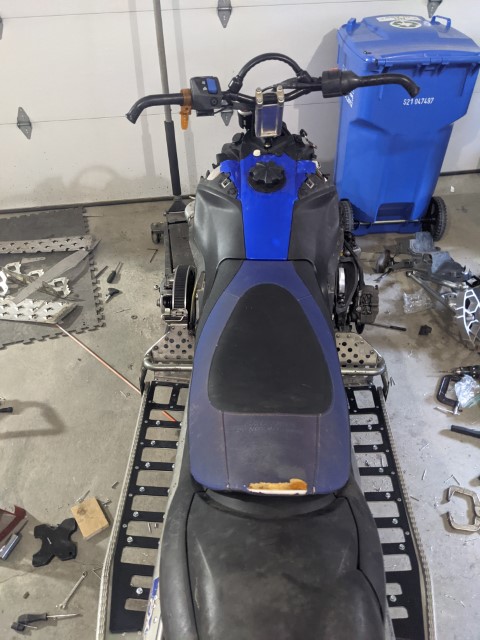 A-Arms also went on without a hitch. The Mountaintech kit is really nice and Peter is an absolute legend.


The "I am stupid" delay was that I lost a lower a-arm bushing collar. I noticed this was missing 2 days before Christmas, as I had the rest of the parts and was trying to get it all together. I tried a few suppliers without luck so I reached out to Peter to see if he had one, and he graciously sent it out that same day, enabling me to get it all back together instead of waiting who knows how long for a new one to arrive. This was 100% on me/my mistake, but Peter went out of his way to help me out and get my machine going. What a guy!

So not only is his kit very good quality, installed easily/exactly as directed, it was also easy to dial in the alignment and Peter is just a great guy and clearly a fellow enthusiast.

Took it for a little shakedown around the neighborhood and it's feeling great. Hitting the real snow tomorrow and I can't wait to see how this machine performs with all the changes. Needs blue or black ski loops though...
You must log in or register to reply here.

R
New to me Nytro, questions.
2

Carbon build up in turbo
2