Found my answer in an older thread of what happens if ROV freezes with a BOP oil tank gasket for anyone who's wondering. With this latest BOP second bypass to top of engine I think we're in good hands.

Rtbo said:
I put it on this year no leaks and I’m using the stock rov. 1500 miles on it so far. But to be fair I had 5800 miles on the stock oil tank gasket with no leaks. This year in Quebec it was so cold my oil pushed out between my oil filter gasket on 2 mornings.
Click to expand...

I still have the stock rov with the oil tank gasket, now with 9200 miles total 3400 with the gasket and no leaks

Rtbo said:
I still have the stock rov with the oil tank gasket, now with 9200 miles total 3400 with the gasket and no leaks
Click to expand...

Just turned 10,000 miles on mine last ride of the season last weekend .
No gasket and no leak !

hibshman25 said:
Part of me wanders if they excessive oil in air box is a result of frozen valve. 40 psi surge of pressure will certainly push bunch of oil into air box once valve un freezes. If tank is always vented you will never get that burst of pressure that could be forcing excess oil into the box. I'm going to clean out my air box today and monitor oil build up in box while running my bypass.
Click to expand...

I read below on Travis's blog. I guess its not a two birds with one stone fix.

hibshman25 said:
3/26/21
After 2 seasons of testing my rollover bypass concept on my father's Sidewinder I'm comfortable releasing the kit. I added it to the store the other week and working on the info page today. On my last trip I was till getting some oil accumulation in air box. The constant oil vapor being vented to air box appears to unavoidable with the stock configuration on 20 and 21 models. Going to explore some options to contain the oil from dripping out of the air box. My 21 SRX is supposed to be picked up tomorrow. I am ordering a 22 GT with EPS for next year. Anxious to do some trail comparisons next year between EPS and my MPS.
Click to expand...

Most sidewinder owners with the updated heated R.O.V.are not aware that you should preheat the valve,by leaving the ignition on for approximately 1 min before starting,to insure the valve will not stick closed during the coldest conditions (mentioned on the B.O.P.blog)

sidewinder 2018 said:
Most sidewinder owners with the updated heated R.O.V.are not aware that you should preheat the valve,by leaving the ignition on for approximately 1 min before starting,to insure the valve will not stick closed during the coldest conditions (mentioned on the B.O.P.blog)
Click to expand...

Agreed but Travis has his bypass installed on his Father's Sidewinder and still found oil in airbox.

I just read below post by Travis helping a member on a 05 RS Vector engine. Which brings some question I have.

1. Is there more oil in the airbox of a Sidewinder then an Apex or Vector? Never had an issue with both of mine? Wipe them once at beginning of season and that it. Didn't even know I had an ROV in them.
2. On Sidewinder does the oil go back to motor via the stator cover too? I know it leaks on clutch which is a problem but on Apex and Vector it could of leak in the air intake vent too when oil tank is overfilled.
3. Is it because of the turbo their is so much air suction in airbox the oil gets in the air cooler?
4. Why was freezing up of the ROV never been an issue before?

Basically what I'm asking is why is ROV and oil in airbox a problem on this engine?

hibshman25 said:
That is the rollover valve that relieves pressure from the oil tank. Perfectly normal for oil to come out of the hose. If you loook closely at air box that hose attaches to what is essentially a catch can. The small hose on bottom of airbox drains the oil from catch can back into motor via the fitting on the stator cover.
Click to expand... 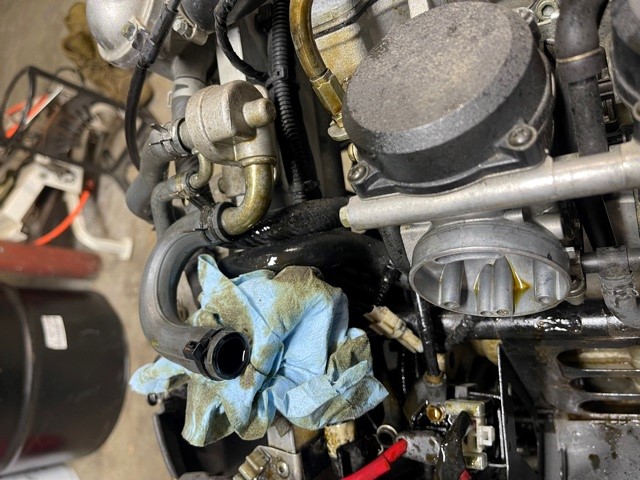 I think the issue is you can't introduce the vent vapors close to the throttle bodies on the turbo set up. If you vented it it right by the the throttle bodies it would likely ingest and burn most of it. With boost that is not an option though, so it has to be vented pre turbo. The distance is simply too long for the oil to stay entrained in the airstream and it starts dropping out along the way.

I've been doing some research and figuring and will be starting a new thread on how to address the oil on clutches on the 20+ models. The 17-19 models had no issue with oil on clutches and it appears that we can revert back to that setup. The roll over valve was vented to a fitting on the intake tube connecting turbo to airbox. The 20+ models still use exact same intake tube, but they simply capped it off (item 57) and then routed roll over valve discharge hose inside the air box. On 17-19 the oil drop out would lay in the low point of the intake tube, which was easy to clean out and a much better accumulation point than the air filter and box that sits above the clutches. At this point I'm thinking we revert back to venting the roll over valve to the port like 17-19. This can be a rather simple DIY with some hose and a rubber plug but once my 22 arrives I will put together a kit with hose, clamps and a plug for airbox for those that just want to buy everything at once.

Some will likely say they had excessive oil accumulation in this tube and in the intercooler, but I suspect that was likely the result of a frozen valve that let loose after 40 psi build up and discharged a shot of oil. My bypass kit should ensure this never happens, so I suspect we just get light accumulation and we clean it out with a rag and long screwdriver as needed. 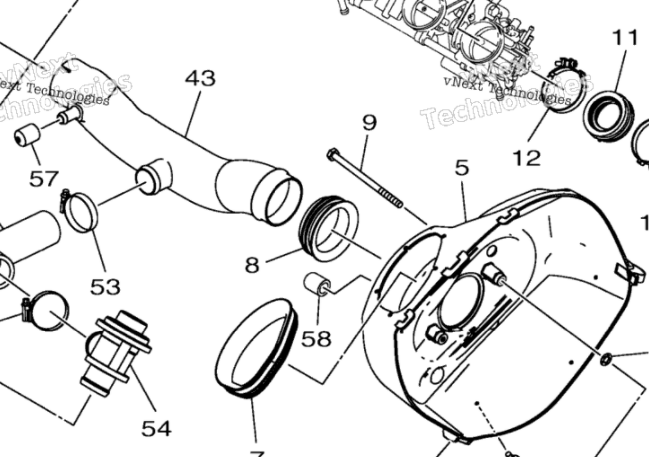 Thanks Travis this is very insightful! I got lots of parts from you last spring for my '22. Probably won't be economical to order this future "revert back ROV to port" kit with shipping to Canada but keeping my eye to see what you'll do.

I got your bypass kit to valve cover already. So if this diminishes greatly the oil fumes from the ROV then:

Plan A: I'll just vent it to top of belly pan under engine close to filter door so I can clean easily. There is a filter door on the belly pan of this thing is there?!

Funny you should mention the cleaning out at the access panel on bottom of belly. One thought I had was to route roll over discharge to a "drop out" box in the belly pan and from the box run up to the intake tube. Sludge could accumulate in this box and be drained rather than lay in the intake tube. I will likely do some testing on the "drop out" idea this season. In a drop out box the velocity would drop off dramatically so perhaps oil particulate would seperate out of the air stream before traveling up to the intake to be ingested by turbo.

Like an oil catch can? I think the guys here that tried it didn't like it as it would freeze with condensation.
S

Now I'm a bit confused, is Travis's ROV bypass all that is needed to keep the oil out of the air box or is there more that needs to be done. To me oil going into the air intake of any motor doesn't make any sense...seems like it's asking the engine to burn excess oil and carbon up the turbo and piston walls. I see how the ROV bypass prevents all that oil from being burnt in the engine. I'm easily confused..Joe

sailor joe said:
Now I'm a bit confused, is Travis's ROV bypass all that is needed to keep the oil out of the air box or is there more that needs to be done. To me oil going into the air intake of any motor doesn't make any sense...seems like it's asking the engine to burn excess oil and carbon up the turbo and piston walls. I see how the ROV bypass prevents all that oil from being burnt in the engine. I'm easily confused..Joe
Click to expand...

The rollover bypass is to prevent the oil tank from pressurizing if roll over valve freezes shut.

All models have the roll over valve as the primary means of venting the oil tank. On 17-19 models the discharge from valve goes to the port on intake tube, and on 20+ it goes into air box and saturates the air filter. The air box lid does not have a sealed joint, so in time the oil drips from the foam and trickles out of the box and down onto belt/primary clutch. This causes slippage and often yields a squeal when pulling out almost as if you had a secondary that didn't back shift.
N

Phatboyc said:
Like an oil catch can? I think the guys here that tried it didn't like it as it would freeze with condensation.
Click to expand...

Been using the $10 chunk of hose off the oil tank vent for 4 yrs now zero issues. Vented to atmosphere

You mean ROV delete? Very popular but would like to keep it of I can.

Stupid question, does the ROV work when the sled is off? Lets say you want to tip it on its side to work on the suspension trail side.

NYTurbo said:
Been using the $10 chunk of hose off the oil tank vent for 4 yrs now zero issues. Vented to atmosphere
Click to expand...

I feel this is the best solution especially when guys turn up the boost!! Imo Last thing I want is oil/condensation in the intake on a wot run at 20lbs of boost.
You must log in or register to reply here.